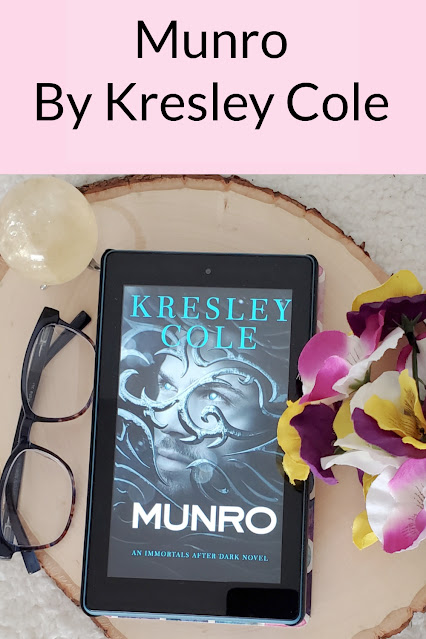 A huntress of immortal monsters. An immortal werewolf. Could the relationship be any more doomed and scorching hot?

After escaping being captured by a group of rogue warlocks, Munro MacRieve unexpectedly finds his meat or should I say loses her. Enraged he tricks one of the warlocks to help him travel through time to find his mate before she died. When he finds her he learns that she is a Huntress of immortal creatures like himself.

When an unexpected guest crashes Kereny “Ren” Codrina's wedding she does what any crafty huntress would do: she seizes him. Yet she discovers herself softening toward the wounded beast. But when he turns the tables and forces her into an unimaginable future will she be able to accept the life that he offers.

I need to preface this before I continue and that is that this happens to be my favorite author and book series next to Joanna J. "Wolf Country Series". The fact that Kresley Cole took two years to release this book was driving me insane. I cannot say how excited I was when I heard that it was coming out finally...I mean I was tickled pink!

I have been reading her Immortals after dark series since the release of “No Rest For The Wicked” in 2006, so to say that I have been reading KC for a very long time is an understatement. But enough about that, let's get to what you really came to read.

To be honest the only con that I found in Munro was the fact that it felt fast. Meaning by the time that I was up to the last five chapters I felt like there was more story to be told. So even though the book is long and meaty I digested it so quickly that it felt as if it was a novella. But I think that's more my fault because I have been waiting for this book for 2 years so of course.

I read through it like a crazy woman. I stayed up all night. The only other thing that I can think of is that there was a lot of sexual tension as per usual for Kresley Cole, but there wasn't a lot of actual sex or sexual activities. Which would have been nice but does not make the book any less amazing.

Good God, where do I start! I mean it's Kresley Cole you can't go wrong with this woman and her books. They're masterpieces at least that's my opinion. I really enjoyed how the main characters had an enemy to Lover's relationship at the beginning.

The push and pull between the main couple is just right, intense as other books do it where it's to the point that it's very convoluted. The main female character had this Wild Spirit about her but yet was still logical with her decision-making. Which made her more relatable in my opinion so I could see myself as her.

I was very happy that KC explains in the book how bringing somebody from the past doesn't change the future. It's done in a very believable and logical way. I was quite content and happy that one of my favorite couples made it into a cameo in the book and that is Lothaire and Elizabeth.
They unwittingly brought up some interesting conversations for the main characters to work out. Now I don't want to spoil it for you but you get to see the scary side to the nymphs which I didn't expect at all but oh my God was it worth it. Last but not least the epilogue was spectacular. There is a surprise in it that took me aback but at the same time I was screaming "finally!"
I rate this book 5 out of 5 stars. This book for me is five stars worthy because it is just hands down a book you can't stop reading until the end. I felt like I couldn't get enough of it. I wanted to keep reading I wish there was the next book after this was already out. So I was definitely thrilled to read it after two years of waiting.
Munro is a time-traveling Wild Ride that will have you glued to the book. But besides that, it's also a lovely book that's adorable. Where you have two star-crossed lovers finding each other most unusually. If you are interested in something exciting yet down-to-earth and adorable this may be the book that you're looking for. It has fantasy, comedy, love, and some delicious spice.
By Maria Isoldde mariaisoldde at March 05, 2022
Email ThisBlogThis!Share to TwitterShare to FacebookShare to Pinterest
Labels: Book Review, Paranormal Romance, shifter