The Everyday Witch Tarot
Author: Deborah Blake
Illustrated: Elisabeth Alba
Published: Llewellyn Publications
Release Date: January 2017
Card Type: Tarot
Size: 5 x 8 x 2 IN
Purchase: Amazon
For many years I have been a tarot card reader and in that time I've searched for beautiful and unique tarot cards. And these particular cards fall under those two categories.
When I finally purchased them on Amazon I had every intention of creating a YouTube video right away. But as usual, life gets in the way and they sat on my bookshelf for a couple of maybe months without being open collecting dust. Until now, let's see what Beauties this particular Tarot deck has to offer. Are you excited because I am?! 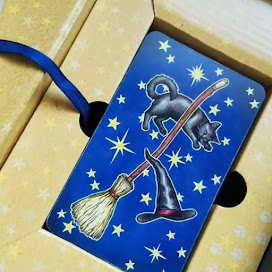 It comes in a hefty box with the judgment card on the front plus the author and artist names. It has a magnetic opening on the side which makes it very fancy-looking.
The box has this beautiful cobalt blue color with the pattern of stars and cat paws. On the inside, once you open it is a light mustard yellow with cat paws and Stars once again. How cute is that!

The first thing you see when you open the box is the book that explains all the cards and this is a pretty thick book in comparison to the traditional little white book.

Beneath the book are the tarot cards that are nicely wrapped in plastic. The box is so well made that you can actually store the deck and the book comfortably. Especially if you don't want to buy a drawstring bag or box specifically to store your Tarot deck.

The deck comes with a 252 page guidebook. Which is a lot for a Tarot deck guidebook. Unlike the traditional little white book, this has a plethora of pages. The pages are filled with tons of information about basic knowledge on how to conduct a tarot card reading, what the tarot is and how to use them.
As well as a paragraph or two about the author and artist. To my surprise, it also comes in color usually guidebooks come in black and white but here you get to see the full color spectrum as you learn each card.At the end of every definition of each of the cards, there is a page for you to write what feelings up towards the card. Similar if not the same to a tarot Journal. The only thing I don't like about the book is that the pages are printed on very glossy paper. And because of this ink does not hold on to that kind of paper really well. So if you are going to use it as a tarot journal it would be best to use a permanent marker.

The cards come in 2 3/4" x 4 5/8" measurements so they're easy to handle and hold while shuffling. The finish on the cards is semi-gloss which I prefer to be honest. And the card stock is decent not too thick and not too flimsy. So you know that they can last you a good amount of time and withstand many readings. The artwork and coloring of the cards are very beautiful and bright.

Unfortunately for those of you that read reversals, these cards cannot be reverse. And what I mean by that is that they have a photo in the back that is easily noticeable if it happens to be reverse. The design is a cobalt blue background, with yellow stars, a witch hat with a broom, and a cute black cat. Which makes it more of a deck that I really love because it's such a cute design.

In this particular deck, the Major Arcana doesn't necessarily have the traditional look to the Rider Waite deck but does have the same message on each of the cards.
There's a dark hooded person with a sword cutting a rope but in the back, there are two doors one is closing and the other is opening. This illustrates the death card quite perfectly where I don't think the rider Waite ever did.

"When one door closes, another opens."

When it comes to the Minor Arcana in this deck it is just as beautiful and intricately done as the Major Arcana. But I feel like it has a more mundane everyday look to it and some of it looks like modern-day time when some of them look as though they're in a different time period.

That doesn't affect how I read the cards but for some of you, it could be a little bit jarring if you really like uniformity. The only thing about the Minor Arcana that I do not like at all but have gotten used to is that the aces look like pages. Which if you are a tarot card reader like myself it can be a little bit confusing at first.

I may be partial to this opinion but I really love colorful decks. So for me, this deck is very beautiful and really sparked some whimsy when you use it.

Also, something that was brought to my attention is that you don't have to be a witch to use this particular Tarot deck. Regardless of it having the name witch on them. I definitely recommend it if you are a tarot card reader and you want to use something other than the rider Waite.

But if you're new to tarot card readings I think that this deck is okay for you to learn. It's not that far from the original Rider Waite that you wouldn't be able to understand the traditional meanings from them.

To be honest, they actually remind me a little bit of the Modern Witch Tarot, so if you like that deck this one could also be one for you.

If you liked this post and would like to support future content, please consider leaving a small tip in the jar.
By Maria Isoldde mariaisoldde at January 16, 2019
Email ThisBlogThis!Share to TwitterShare to FacebookShare to Pinterest
Labels: Deck Reviews, Divination tool, Tarot