5 Magical Facts About The Moon That Will Surprise You! 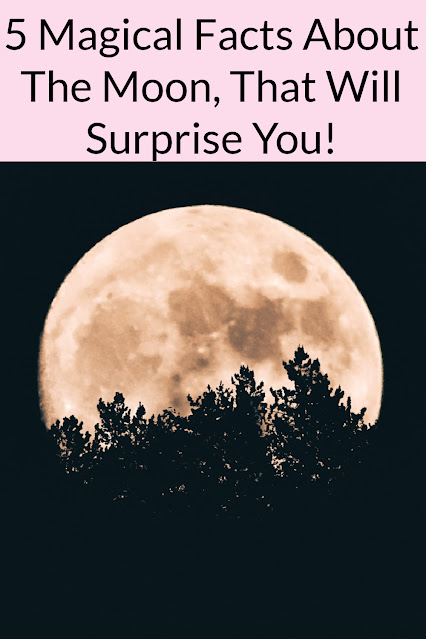 “Moonlight drowns out all but the brightest stars.”
― J.R.R. Tolkien, The Lord of the Rings
The moon is a celestial body that has been Fascinating People for centuries. It is mysterious, scary, and alluring.

People have been writing stories and poetry throughout the centuries about the mystery and beauty of the Moon.

Since man has existed the moon has always been there shining down with its lunar light on Full Moon nights. Wolves howl at it and the ocean response to its magnetic pull.

We are always going to be fascinated by the moon regardless of how old we are and how much mankind has changed.

At least that is what time has proven. I'm pretty sure so have you. So let's quench that Curiosity and find out 5 magical facts about the Moon.

Yeah, You heard right. Studies show that women are most likely to give birth on full moons especially after they've given birth to their first child.

Not just the moon but also the rest of the woman's birth chart can determine what time of year and age she is most likely to be fertile.

So it's not just a wives tale that the Moon encourages fertility and that it has an effect on our reproductive organs as women.

There's even software that is being developed for doctors to know through your birth chart the optimal time that you will be fertile.

Wolves howl at the moon because they love her.

Myth And legend say that wolves howl at the moon because they are in love with the Moon.

They feel a connection; some also suggest that wolves howl because the Moon is their goddess and they are praising her and showing her love.

They are in trance by this round sphere that is bright and beautiful.

Sadly that is not the case, in reality, wolves howl to communicate long distances with other wolves. To let them know of prey or threats are in the area and to signify their location.

But personally, I love the myth more than the reality.

The moon can bring you prosperity.

The Moon is associated with wishes and making things happen. Either for good or bad.  And if you're a witch worth your salt, you already know that.

But for those of you that don't know the moon has a lot of power and sway when it comes to Magic. That's why most Witches cast spells on the full moon or on the new moon.

Depending on what they want the outcome to be.

One particular myth is that if you're walking or standing outside during the full moon and you want money to come to you, put your hand in your pocket and jingle your coins.

I'm definitely trying this next time. I will update you guys on the outcome.

The moon will drive you crazy with love.

The moon not wanting to be outdone is also associated with love and marriage.

Folklore states that if you consummate a marriage during the full moon you're guaranteed a happy marriage. If only!

You're also most likely to meet someone that you'd have a romantic connection with during the full moon.

And there are actual studies that show that during the full moon you're more likely to want and desire to make love. So if you don't want them a little mini me's I would suggest you wrap it.

Yeah I know, it doesn't make sense but bear with me.

To honor Artemis's birthday the Greeks used to bake cakes in the shape of the moon with candles on it. They would leave the cakes on her altar, blow out the candles, and make a wish.

Now we all know that many goddesses and gods are connected to the Moon.

But this definitely takes it to an interesting level, considering that to this day we do that for people on their birthdays.

So technically speaking when we celebrate her birthday and we blow out candles we're connecting to Artemis whether we know it or not.

The Moon is always with us.

It doesn't matter what age it is or how science has demystified the Moon.

We will always find it surprising, alluring, and damn right magical.

So when you look up at the moon at night know that there's more than just a piece of rock that floats around our planet.

300 years from now we're going to have other legends and myths that pertain to our time that maybe we didn't realize that we are creating for future generations.

The moon will always be a part of our wonder and imagination no matter what.

If you liked this post and would like to support future content, please consider leaving a small tip in the jar.
By Maria Isoldde mariaisoldde at July 02, 2016
Email ThisBlogThis!Share to TwitterShare to FacebookShare to Pinterest
Labels: Lore and Myth