How to Set Up Your Samhain Altar


The nights get longer the days get shorter the wind gets chillier,  the leaves start to fall and winter is looming. This is the time of year where the earth goes into hibernation.
It's the time of the year that for a lack of a better term the Earth dies. In ancient times people realize this and they also noticed that the veil between the living and the dead is very thin.

They use this time of the year to communicate with their deceased loved ones. To know if their crops were going to grow next season if they were going to be safe for the winter, and to reconnect with old loved ones that have been gone.In return giving them offerings and gifts of their favorite food and drinks.

Over the centuries this time of year has become Halloween October 31, where we dress up as monsters and sexy cheerleaders as we go house to house asking for candy. But for centuries this holiday was called Samhain and some of us till this day still celebrate this holiday to honor the Dead and to communicate with them.

In this blog post, I'm going to help you out creating your ancestor Altar for Samhain. Now there's no hard-fast rule and how you're supposed to do this but think of it more as me giving you ideas. I also did another blog post a couple of years ago on how to do a Dumb Supper so if you're interested go check that out. You might be able to add something from there as well from what I'm telling you here.

Now when it comes to color Samhain is known for the stereotypical Halloween colors which are black, purple, orange but you can also add dark Reds such as burgundy. These colors are all seen in nature during this time period, that's why they are associated with this holiday.

Symbols of Samhain or Death

The symbols of Samhain typically are symbols of the Fall Harvest and death. My advice is to be creative and select the things that really resonate with you. Never put anything on your altar that you don't feel comfortable with. So things such as:

Traditional Samhain food is actually some of the most delicious food I have ever had. It's easy to find in the grocery stores, it's already packaged and made. If by any chance you're like me and don't have the convenience of having an oven. But if you happen to love baking this holiday has some amazing recipes and traditional foods that will keep you on your toes and your tummy full.  These are some of these delicious foods:

Now for some of you that don't know what are your beloved ones, there are the family members, friends, and ancestors that have passed on. Since this is the day that we honor them the most, it is customary to have something that symbolizes them on your alter this could be a picture, an object that was theirs, or something that just reminds you of them.
For many years I would use my father's photo to represent him but there was one year where I could not display his photo. So I used his Toyota Tacoma car key. It didn't lessen the connection that I had with him just because it wasn't a photo. So do what you can with what you know and have of the person that you would like to honor and reconnect with.

Just like many other cultures during this time it is customary to give an offering to your beloved ones during this time of year. Now, I would suggest that you give them biodegradable offerings and gifts. Such as a small portion of food or drink that was their favorite thing to eat. For instance, my father really loved Little Debbie cakes, Cuban-style red or black bean soup, and or a tiny little cup of Cuban coffee. Those are the typical offerings that I give to him during this time.
This doesn't have to be food it could be other objects as well. Such as if they were smokers you can give them a cigarette. You don't have to light it you can just leave it right over or next to what you are using to symbolize them. The reason that you use biodegradable objects as offerings is that typically the day after Samhain you take the offerings that you gave to your beloved ones and take them into the Earth. So keep in mind that your offerings should be safe to put back into the Earth. 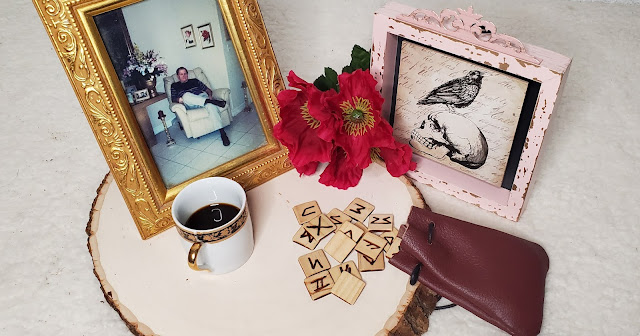 I hope that everything that I've given you guys in this blog post will help you create the perfect Samhain ancestor Altar for the holidays. I really hope that you will be creative and put a lot of love into the making.
If you liked this post and would like to support future content, please consider leaving a small tip in the jar.
By Maria Isoldde mariaisoldde at October 16, 2021
Email ThisBlogThis!Share to TwitterShare to FacebookShare to Pinterest
Labels: Sabbats, Samhain, Wicca